As we begin our New Year making resolutions about different areas in our life, let's really try to make our faith our number one priority.

I strongly believe that if we can make a commitment to pray just 14 minutes a day our life can truly be changed.  So, Lima Life Teen, Total Youth Ministry is inviting you to take the "Prayer Challenge" with us.  We are asking everyone to just take 14 minutes out of your day to pray.  Your prayers don't have to be perfect, just spend 14 minutes talking to God.  We will have many prayers, bible studies and inspirational music on our website at limalifeteen.com or our Lima Life Teen app for Droid or iphones.

So everyone please join us in making this New Year a powerful year of prayer.  Watch for updates and new information.  We will have lots of different ways for every person in our Parish to participate!

To start you off we would like to leave you with one of the prayers that Lima Life Teen is committed to pray each day of 2014:

I pray to you, God the Holy Spirit, and I give all of myself to you.  I worship you for you are pure, just and powerful as love.  You are my strength. You are my guide.  I ask for you to surround me and change me.  Change my mind to think like Jesus.  Change my body to act like Jesus.  Change my heart to love like Jesus.  Give me the ears to hear your voice guiding me, and when I hear your voice, may I obey.  Make me holy and joyful.  Give me the courage I need to live as a missionary.  May people come to know Jesus because I am in their lives.  Amen

Angie Speaks - Scripture of the day:

Emancipate yourselves from mental slavery... 1 John 3:1 “See what love the Father has given us, that we should be called children of God; and that is what we are. “

I remember one time my heroine, my Grandmother asked me what is wrong.  I said, "I just don't think anyone likes me and I don't really like myself."  In my grandmother’s strong Kentucky voice she said, "Angie if you can't say anything or think of anything good about yourself.....then just say I am Sue Crisp’s granddaughter.”  That is exactly what 1 John 1:3 is saying.  NO, matter what you may be feeling about yourself or what others may think of you...YOU ARE A CHILD OF GOD.  Simply being God's child makes you good enough.

Love you all!
Posted by Lima Life Teen at 4:01 PM No comments:

Emancipate Yourself From Mental Slavery

Yesterday, I spent some time listening to one of my favorite songs over and over, Redemption song, by Bob Marley. My favorite line in the song is “emancipate yourself from mental slavery none but ourselves can free our minds”.

I know that a lot of folks find that line “cool” and some even consider it one of your favorite quotes. We feel all empowered when we hear it, and find ourselves saying yes. But I wonder if we really understand what it means to be mentally enslaved? –Do you really get what the line is really saying? Really? It is all up to you! It’s not about the man or someone else it is what you are choosing to do to yourself. It is anytime that we allow society to tell us who we are or aren’t. It is when we allow our culture to spoon feed us their idea of what good enough is. It is anytime we say that we don’t know our purpose, our power or our awesomeness. It is when we are not walking as a child of God with all the benefits of the King.

How do you truly emancipate ourselves from mental slavery? Romans 12: 1 “I appeal to you therefore, brothers and sisters, by the mercies of God, to present your bodies as a living sacrifice, holy and acceptable to God, which is your spiritual worship. Do not be conformed to this world, but be transformed by the renewing of your minds, so that you may discern what is the will of God- what is good and acceptable and perfect.”

We need to take some time each day and truly find out who it is that God says we are. So this summer I will be sharing a scripture each day or a quote each day regarding who you really are. Transforming our minds isn’t enough. You need to accept that you were created for a purpose and act on it. Let’s face it, a lot of individuals choose not to walk in freedom because it takes a lot of hard work. They would rather be consumed by this culture and all its offerings so they have someone to blame when they don’t try. It’s not easy but you are the one that must free your mind by choosing to believe that God created you with purpose and God has a plan for your life. Jeremiah 29:11 “ For I know the plans I have for you, ‘declares the Lord,’ plans  to prosper you and not to harm you, plans to give you hope and future.”

So today, my prayer for you, is that you have the courage to choose to emancipate yourself from mental slavery and free your mind.

The Lessons Farley Has To Teach Us All 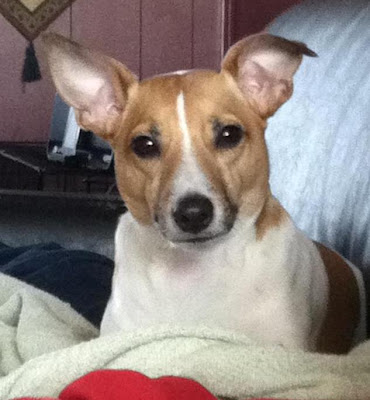 This Sunday I shared that I have three amazing dogs, Fuzzy Beardog, Jumpin Jenny Gump, and Farley Jo aka “Phat Jack”, Farles Barkley or Mr. Jack.

Farley is an amazing Jack Russell.  My son Zach and I found him at a pet store where nobody wanted him and they were about to get rid of him.  He was the coolest puppy there and he matched my oldest son’s red hair.  Farley was an instant gift to our family because we had just lost our German Shepherd we had for 17 years.  Farley brought so much joy and peace to our family. My son Zach charged him with taking care of me and told him his seat in the car was on the arm rest.  He still sits there to this day every time we are in the car.

Farley is a little on the “heavy side” for a jack.  When he is excited his little bobbed tail moves extremely fast and he sways his entire body back and forth. Farley has an issue though.  He constantly compares himself to my other two dogs.  His comparison issues have begun to be an obsession.

Here are the examples:

1.      Each week I come home with bones.  I have to give Farley his first because he is so overwhelmed with excitement and he is jumping the most.  I hand Farley his bone….he runs with it and hides it in a corner, and is back just in time to watch me hand jenny and bear their bones.  As Jenny and bear chew their bones Farley lays in between the two and just whines and whines because he wants their bones instead of the one he has been given.  He wants what the others have so much that he cannot enjoy what he has.
2.       I can sit and pet Farley and give him love all day and no matter how much love I give him, he needs more.  If another dog comes and sits by me, he comes up and puts his big “Phat Jack” behind on their head!  Yes, he sits on their heads!  He can’t allow anyone a chance for attention.
3.       When we first got Farley he was a master at playing ball.  When we got Jenny Gump she learned to play ball watching him.  One day though, I threw the ball and Jenny got to it first.  She started beating him to the ball quite regularly.  Farley got beat pretty often. One day I threw the ball and both Jenny and Farley went after it….Farley felt Jenny coming up behind him so he just turned around and gave up.  Now, every time we play ball Farley just goes up on the porch and lies down.  He has compared himself to Jenny Gump…he believes that he can never catch her so he has quit.

These are some real examples of comparison for all of us.  Have we compared the material things of others so much that we become obsessed to just get more or that we can’t appreciate what we have.  Have we sought the attention of a group or person that we tend overpower others by not letting them speak or have a chance, and only think of ourselves. Have we given up on something that we love because we just don’t believe we are good enough?

Each one of us were created for a purpose and for Gods great design.  We were not created the same or for the same purpose as anyone else in the world.  In Psalm 139 and Jeremiah 29 God is clear that he created us a unique individual and He has plans for us! We matter, we count and we are needed!  Just as who we are!

2 Cor. 10:12  But when they measure themselves by one another, and compare themselves with one another, they do not show good sense.   ----- I realize that our world today is constantly trying to tell us that we have to be just like everyone else and that just doesn’t show good sense.   We spend so much time doing this that we are not taking the time to see our own gifts.  Farley is a precious and amazing gift to me.  When I go to bed, he hops up with me, goes under the covers by my feet, spins around 6 times and lies at my feet keeping them warm.  When I go for long walks  Farley stays right by my side. Farley makes me laugh by sliding down the reservoir hill on his back.  On days I feel lonely he really helps me to feel loved.  He has an amazing purpose!  He is awesome to be around when he is secure in just being Farley. When he is busy comparing himself and seeking to gain more attention is when he is off balance, and to be completely honest -not fun!

God wants us to walk out our purpose.  As Romans 12:2 states he wants us not to conform to what the world wants us to be.   He desires us to renew our minds so that we are listening to who He says we are as well as, what He says our purpose is.   God is asking for us to renew our minds so that we understand that His love will never fail you, it will never give up on you and it never runs out on you. He wants you to experience His love so deeply, so you can fulfill your purpose to share it with every single person you meet.   Renew your minds so that you aren’t concerned with material things or your abilities because you are putting your trust in Him that He will provide all you need.

Dear God, please help me to not compare myself to others today.  Please give me the courage to look to you for my value and my worth.  Help me to have the courage to be myself and to trust IN HIS plans and purpose.